This week I was sworn back into the Senate for another 6 years. I am feeling more energised and determined than ever.

On the agenda this week we had tax cuts, Bob Hawke condolences, the fight for decomocracy in Hong Kong, and privatisation of SA’s trains and trams.

The $158 billion tax cut plan was the first test of the new Parliament and Labor has already collapsed at the first hurdle. The crossbench has shown their true colours and proven that the Greens are the only real opposition in the Senate. 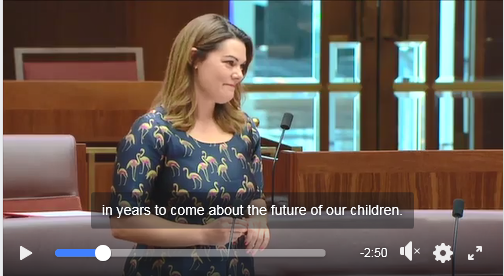 These tax cuts are economically irresponsible. Instead of spending $158b on tax cuts, we could be bringing dental into Medicare, raising Newstart, properly funding public schools and creating thousands of environmental jobs.

Drawing inspiration from the late Bob Hawkes Tiananmen Square humanitarian action, Richard and I called on the Australian Government to make representations to the Chinese Government to uphold democratic rights in Hong Kong. Unfortunately, our motion didn’t get up and the government has stayed silent.

Yesterday my motion calling on the SA Liberal Government to reconsider the privatisation of Adelaide Metro’s trains and trams was successful. South Australia has suffered as a result of the ongoing privatisation of public services.

If you want to protect the environment and look after our most vulnerable, we need to hear you roar.

PS - Only the Greens voted against the destruction of our tax system. Join now to support the #RealOpposition. https://greens.org.au/join