What are our favourite Australian Films and Shows?

In these unprecedented times when we are staying home to save lives - One thing we can do is call for better Australian content on our streaming services.

Last week, I asked people on my Facebook Page - 'What their favourite Australian film and show was? The response was amazing - way too many to list. So instead we have collated the responses through this word cloud.

Can you spot your favourite Aussie film? 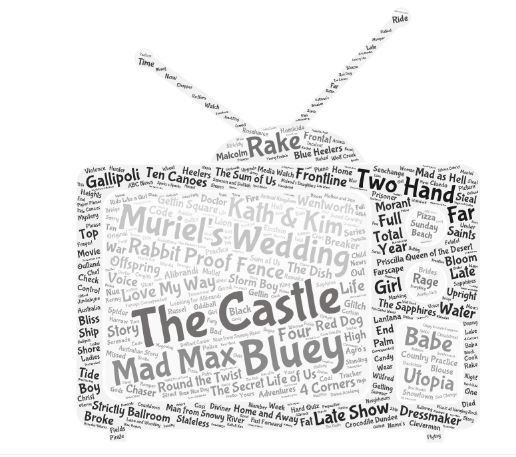 Do you realise that the Australian screen industry is in the fight of its life?

We need Australian stories told on Australian screens by us, to us, about us. Performers, producers, writers, directors and crew have joined forces to campaign for the future of the screen industry.

Check out the 'MAKE IT AUSTRALIAN - OUR STORIES ON SCREEN' campaign.

Note: Information below is sourced from 'Make It Australian' website

Why make it Australian?

Performers, producers, writers, directors and crew are joining forces to campaign for the future of the screen industry. We want Australian stories told on Australian screens by us, to us, about us. We want to Make It Australian.

Stories have been told on this continent for thousands of generations.

We want Australian stories told on Australian screens by us, to us, about us because no-one else will tell stories of the diversity of Australian experiences in our unique Australian landscapes.

But story-telling on screen is at risk. Our capacity to make it Australian is at risk because:

The campaign references the successful “TV – Make it Australian” campaign of the 1960s and 1970s. In response to a parlous situation where only 1 per cent of drama on commercial networks was Australian – the other 99 per cent foreign – the industry sought local content obligations on commercial broadcasters. The Australian Film, Television and Radio School was also established out of the original campaign.

The campaign has been launched in response to a number of developments this year:

What the campaign is asking for

The campaign is seeking a strong government commitment to a sustainable film and television industry for producers, cast and crew, writers and directors that supplies a diversity of quality Australian content for Australian and international audiences.

To this end, the campaign is asking for:

Show your support for the campaign.